101 Marketing Secrets #3: Tactics Are the Third Leg Along with Goals and Strategies 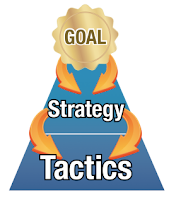 If you have arrived at this post without having read the previous two on goal setting and setting a a marketing strategy, you might want to go back and read those first.

In those posts I made the case that spending time creating goals and strategies for achieving those goals will pay off for your business.  The amazing thing is that the total time needed to do this job well might be a day or two.  To be sure, some owners or managers never take these steps even though they would tell you that they should.  I suspect the number one reason is that it seems very hard to do.  And it is.  You have to be honest with yourself and make hard choices.  And it is really risky.  You might make a mistake.  It often seems easier to wing it.

Once you have the goals and strategies in place, the tactics or action steps can be put in place.  Entrepreneurs love this step.  The gut tells them which way to go.  Certainly some are blessed with a great gut.  I'll put forward the argument that even the merchant with a golden gut will improve his results if he sets clear goal and strategies to go with them.

Many managers are unclear as to the difference between strategies and tactics.  How about a couple of examples.  The goal is a 20% increase in gross sales dollars.  The strategy is to increase the sales force by 10%, prices by 10% and dollars per year per customer by 15%.  The budget is part of the strategy, and the budget is 3% of the current year's sales.

Now it is time to add the tactics.  To increase the sales force by 10% we will hire three people and expect one to leave, giving us the 10% increase.  We will look for candidates through an online effort with a budget of $10,000 per salesman.  The ideal candidate will have experience in our industry and might even be employed by a competitor.

You may want even more details in the tactical plan, but hopefully this gives you the basic idea.  Have you used this approach of Goal, Strategy, Tactics in your planning?  How did it work for you?

If you aren't already a follower of this blog, be sure to subscribe or set up a feed.  You might want to take a look at my original 1, 2, and 3 most important marketing secrets, that will forever be the sequel to this new prequel.  If you'd like to see them, the are now listed as 4, 5, and 6:

Now we will return to number seven, which will be a secret.  What would be your number seven?
at 8:00 AM

I enjoyed reading your article :) PLease continue publishing helpful topics like this. Regards, from alwaysopencommerce.com.

I think this article will fully complement your article.

Get Your Free eBook - Doing the Hard Things

Just Out on Amazon

Randy Kirk is the blogger behind Marketing Your Business. He is a marketing consultant working with small businesses to optimize their online and traditional marketing strategies and tactics.